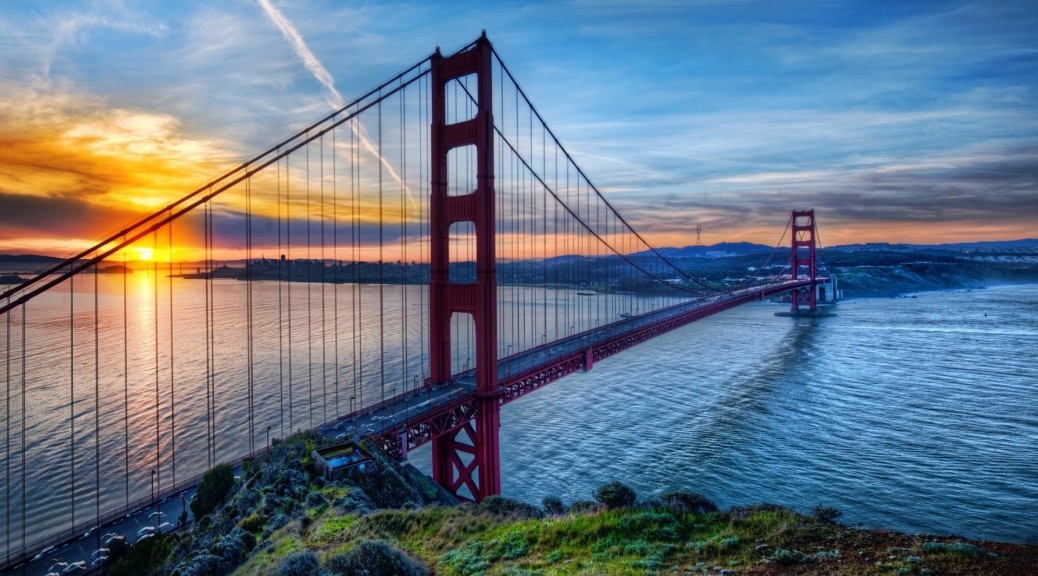 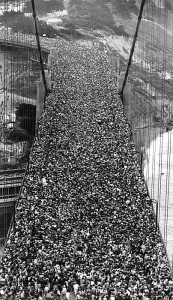 The American Society of Civil Engineers has named it as one of the Seven Wonders of the Modern World. (The others are The Chunnel, CN Tower, Empire State Building, Itaipu Dam, Delta Works, and the Panama Canal.)

When it was built it had the longest suspension bridge main span in the world. It held this record until 1964.

Today you can cross the bridge by foot, bicycle, or car. Pedestrians and bicycles can cross toll-free. Vehicles must pay when traveling south into San Francisco.

Along with being a well-known symbol of San Francisco, the bridge is popular with people who want to commit suicide. It’s the second most popular suicide bridge in the world. It’s not a pleasant way to die. A New Yorker article describes it like this:

[T}he impact is not clean: the coroner’s usual verdict, suicide caused by “multiple blunt-force injuries,” euphemizes the devastation. Many people don’t look down first, and so those who jump from the north end of the bridge hit the land instead of the water they saw farther out. Jumpers who hit the water do so at about seventy-five miles an hour and with a force of fifteen thousand pounds per square inch. Eighty-five per cent of them suffer broken ribs, which rip inward and tear through the spleen, the lungs, and the heart. Vertebrae snap, and the liver often ruptures. “It’s as if someone took an eggbeater to the organs of the body and ground everything up,” Ron Wilton, a Coast Guard officer, once observed.

Those who survive the impact usually die soon afterward. If they go straight in, they plunge so deeply into the water—which reaches a depth of three hundred and fifty feet—that they drown. (The rare survivors always hit feet first, and at a slight angle.) A number of bodies become trapped in the eddies stirred by the bridge’s massive stone piers, and sometimes wash up as far away as the Farallon Islands, about thirty miles off. These corpses suffer from “severe marine depredation”—shark attacks and, particularly, the attentions of crabs, which feed on the eyeballs first, then the loose flesh of the cheeks.