President Lyndon Johnson had announced that he would not seek re-election, but his vice-president Hubert Humphrey decided to run. Anti-war activists saw him as someone who would continue the war policies of Johnson so they came to Chicago to protest the war.

The Republican convention that year was being held in Miami and some Democrats tried to get their convention moved there too. There was a phone strike in Chicago and reporters needed phone lines to get their stories in to their networks (this was before satellites and immediate streaming of news reports.)

Chicago’s mayor, Richard Daley, was a powerful part of the Democratic political machine and he was able to keep the convention from being moved out of his city.

Daley wanted Ted Kennedy to run. (This was before Kennedy left Mary Jo Kopechne to drown in his car. Not that it would have made any difference to Daley if it had happened earlier.) This challenge, plus the anti-war groups made it unsure that Humphrey would get the nomination.

There was in-fighting among the delegates on what to include in the Party Platform and delegations marched around the convention hall in protest. In spite of the division, Humphrey got a majority of the delegate votes and won the nomination. The convention ended with a tribute to Bobby Kennedy and a sign-carrying demonstration in support of Richard Daley (paid for by Richard Daley.)

Protesters were stopped in their march to the convention hall. The police used their batons to beat protesters. Innocent bystanders and doctors that were trying to come to the aid of the injured were also beaten. Police used teargas on the protesters and sprayed them and other people in the area with mace. 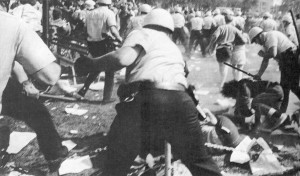 In the end, Chicago police reported 589 arrests and said that 119 police and 100 protesters were injured. (Those numbers don’t sound fake, nope, not at all.)

Eight people were charged with the federal crime of crossing state borders to incite a riot (part of the Civil Rights Act). Mayor Daley later rewarded the police with a pay raise for their vigilance in keeping the peace.