Three weeks later on August 6, 1945 the first atomic bomb used in a war was dropped on Hiroshima, Japan. 66,000 people died and 4 1/2 square miles of the city was completely destroyed.

Three days later a second bomb was dropped, this time on Nagasaki, Japan. It killed 36,000 people and destroyed 40% of the city. Neither of these were the deadliest bombing attacks on Japan. Over 100,000 people died as a result of the Operation Meetinghouse bombing on Tokyo on March 9, 1945. The biggest difference is that the Tokyo bombing used 330 B-52s and they used incendiary bombs carrying napalm.

The dates of the first atomic bomb tests by other countries are: 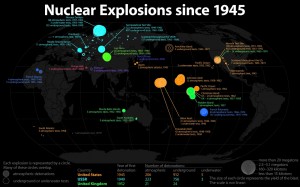