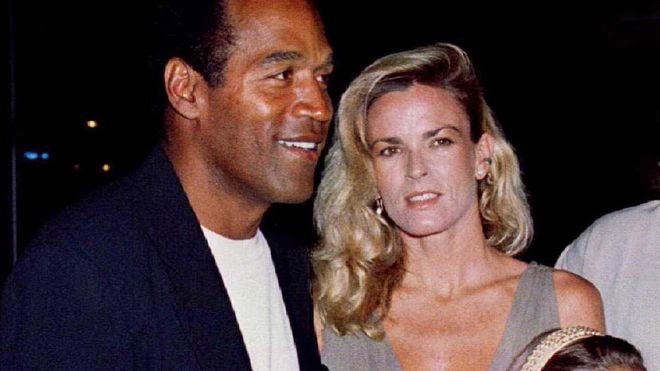 Simpson had gained fame as a Heisman Trophy winning football player, but by the 1990s, was better known by many as an actor in The Naked Gun trilogy.

But, then, Nicole and Ron were murdered on June 13, 1994. The police found evidence that made them suspect Simpson. His lawyers told police that he would turn himself in on June 17. He was due there at 11:00 am but failed to show. At 2:00, the police issued an all-points bulletin. That evening, at 5:00 Robert Kardashian, Simpson’s lawyer and friend (and father of those Kardashians), read a letter from Simpson that sounded like a suicide note:

To whom it may concern: First, everyone understand I have nothing to do with Nicole’s murder. I loved her, always have and always will. If we had a problem, it’s because I loved her so much.

Recently, we came to the understanding that for now we were not right for each other, at least for now. Despite our love we were different, and that’s why we mutually agreed to go our separate ways. It was tough splitting for a second time, but we both knew it was for the best.

Inside I had no doubt that in the future, we would be close as friends or more. Unlike what has been written in the press, Nicole and I had a great relationship for most of our lives together, Like all long-term relationships, we had a few downs and ups. I took the heat New Year’s 1989 because that’s what I was supposed to do. I did not plead no contest for any other reason but to protect our privacy and was advised it would end the press hype.

I don’t want to belabor knocking the press, but I can’t believe what is being said. Most of it is totally made up. I know you have a job to do, but as a last wish, please, please, please, leave my children in peace. Their lives will be tough enough.

I want to send my love and thanks to all my friends. I’m sorry I can’t name every one of you, especially A.C. man, thanks for being in my life. The support and friendship I received from so many: Wayne Hughes, Lewis Markes, Frank Olson, Mark Packer, Bender, Bobby Kardashian.

I wish we had spent more time together in recent years. My golfing buddies, Hoss, Alan Austin, Mike, Craig, Bender, Wyler, Sandy, Jay, Donnie, thanks for the fun. All my teammates over the years, Reggie, you were the soul of my pro career. Ahmad, I never stopped being proud of you. Marcus, You’ve got a great lady in Catherine, don’t mess it up. Bobby Chandler, thanks for always being there. Skip and Kathy, I love you guys, without you I never would have made it through this far. Marguerite, thanks for the early years. We had some fun. Paula, what can I say? You are special. I’m sorry we’re not going to have our chance. God brought you to me I now see. As I leave, you’ll be in my thoughts.

I think of my life and feel I’ve done most of the right things. What the outcome, people will look and point. I can’t take that. I can’t subject my children to that. This way they can move on and go on with their lives. Please, if I’ve done anything worthwhile in my life. Let my kids live in peace from you (press).

I’ve had a good life. I’m proud of how I lived. My mama taught me to do unto other. I treated people the way I wanted to be treated. I’ve always tried to be up and helpful so why is this happening? I’m sorry for the Goldman family. I know how much it hurts.

Nicole and I had a good life together. All this press talk about a rocky relationship was no more than what every long-term relationship experiences. All her friends will confirm that I have been totally loving and understanding of what she’s been going through. At times I have felt like a battered husband or boyfriend but I loved her, make that clear to everyone. And I would take whatever it took to make it work.

Don’t feel sorry for me. I’ve had a great life, great friends. Please think of the real O.J. and not this lost person.

Thanks for making my life special. I hope I helped yours.

He made a smiley face inside the “O” of his initial. If that’s not a sign of a disturbed mind, or a 13-year-old girl (but I repeat myself), I don’t know what is!

A little after 6:00 that evening, OJ Simpson was seen riding in a white Ford Bronco. Police were notified and, shortly before 7:00, were able to track down the vehicle. When they approached it, the driver, Al Cowlings (a friend and former teammate), told them that Simpson was in the back with a gun to his head. The police backed off but continued to follow the SUV. What came next was the most surreal, and most watched, police car chase in the history of forever.

Driving as slow as 35 miles per hour, the chase went on for 50 miles. The Bronco was followed by 20 police cars and another 20 news helicopters. TV stations interrupted their regular broadcasts to cover the chase. Over 95 million people watched from home and thousands of Californians stood on overpasses to watch the Bronco travel down I-405 and lined the streets near Simpson’s Brentwood home.

(This is a short clip. If you want to watch the whole glorious 55 minutes of it, you can do so here.)

Eventually Cowlings drove the Bronco to Simpson’s home and, after another of his attorneys, Robert Shapiro, arrived, Simpson turned himself over to the police. He was arraigned on July 29 and pleaded “Absolutely, one hundred percent, not guilty.”

Even though the evidence against Simpson was strong and included much DNA evidence, the jury (10 women and 2 men/9 blacks, 2 whites, and 1 Hispanic) returned a not guilty verdict after four hours of deliberation on October 2, 1995. Judge Ito waited to announce it until 10:00 am on October 3.

The jury in the criminal case were accused of being too ignorant to understand the DNA evidence and of being biased (because of the majority black jurors). Critics said they found OJ not guilty simply because blacks were outraged over the LA police in the Rodney King trial three years earlier being found not guilty.

The police were accused of mishandling evidence and  Detective Mark Fuhrman was accused during the trial of being a racist. The prosecutors failed to let the jury know that Simpson’s story changed several times while he was being interviewed and about items he had in the Bronco with him – several thousand dollars in cash, his passport, a change of clothing, and a fake mustache and goatee. They also made a mistake when they decided to have OJ try to put on the left-hand, blood-soaked glove found at the murder scene (and which was the match for the right-hand glove found at Simpson’s home). That lead to this…

Critics thought that the prosecutors and the judge had let themselves be influenced by the TVs in the courtroom. That lead to the Dancing Itos (named after Judge Ito), this time featuring (prosecutor) “Marcia Clark”.

In 1997 Ron Goldman’s parents and Nicole Brown Simpson’s father brought a wrongful death civil suit against Simpson. The standards of evidence for a civil trial only require a “preponderance of evidence” while a criminal trial requires proof “beyond a reasonable doubt”. The jury in this trial found OJ was likely guilty and required him to pay $12.6 million to Nicole’s and OJ’s children, Sydney and Justin, (as heirs to their mother’s estate) and $33.5 million in damages to the victims’ families.

In 2006 a book called If I Did It by OJ Simpson (ghostwritten by Pablo Fenjves) was to be published.  In it, Simpson offered a “hypothetical” description of how he would have accomplished the murders. The original publication was cancelled but it was released the next year with the title, If I Did It: Confessions of the Killer. A court awarded the rights to the book to the Goldman family – they got 90% of the profits – to help pay some of the money Simpson owed the family after the civil trial.

On October 3, 2008, exactly thirteen years after he was found not guilty in the murder trial, OJ Simpson was found guilty of armed robbery and sentenced to 33 years in prison. He and several other men broke into a room at the Palace Station hotel in Las Vegas, NV. They had robbed Bruce Fromong of some sports memorabilia items at gunpoint. Did karma catch up with him? Or did he develop hubris after getting away with two murders and think he was untouchable?